Who
Municipalities and Contractors

What
A Better Way to Remove Asphalt

Why
"Nationwide, contractors and municipalities are saving tens of thousands of dollars by revolutionizing the way they reclaim and recycle asphalt. And that revolution is found in an unlikely package – a small milling machine called the Asphalt Zipper." 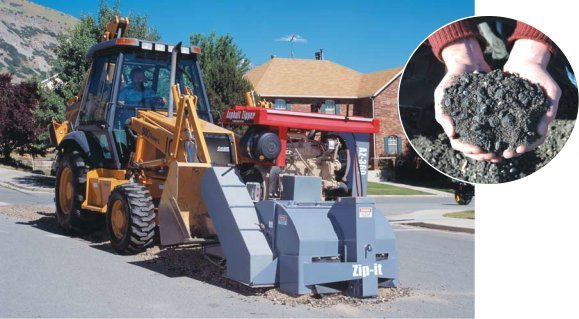 The City of St. George, Utah shaved 70% off repaving expenses. The Town of Matthews, North Carolina completed a job, budgeted to cost $53,000 and take 20 days, for $19,000 in only 4 days. Larry Hess, owner of Hess Construction in California, says he's saved so much money he hopes his competition never finds out about it.

Nationwide, contractors and municipalities are saving tens of thousands of dollars by revolutionizing the way they reclaim and recycle asphalt. And that revolution is found in an unlikely package – a small milling machine called the Asphalt Zipper.

Compact enough to be transported behind a pick-up truck, the Asphalt Zipper reduces thousands of square feet of asphalt into reusable millings, comparable to much larger and more expensive full size mills, at a fraction of the cost.

The Asphalt Zipper machine’s brutal power condenses one-to-two day projects into as little as one-to-two hours. Full-depth reclamation is now affordable and easily accessible providing cities with longer lasting repairs. It may sound cliché, but the Asphalt Zipper machine really is “the most powerful milling attachment on earth,” says Bill Smythe, President of Smythe & Associates in Kirkland, Washington. Smythe, who’s been involved in the construction industry for over 30 years, also says “The Asphalt Zipper machine is easily transported on its own trailer and the Versa-Mount™ Universal Coupler system attaches to most backhoe or loader buckets, so you’re off the trailer and into the cut in minutes.”

Once into the cut, the Zipper saves thousands of dollars in reduced labor, time and equipment costs. "Take for example," says Smythe, "a typical small street repair job with 3,000 sq ft of 6" thick asphalt to reclaim and recycle. Traditionally it's too small to justify using a full size mill, so you saw cut around the affected area at $1 to $2 per foot, then you've got to chunk up the asphalt with a backhoe or hydraulic excavator, then you have to haul the asphalt away, with pretty significant dumping fees. Throw in flag people to maintain traffic, and the time required can be as much as 3-5 days costing up to $3,000-5,000. The Asphalt Zipper can do it all in about one hour, for approximately $250."

Frank Shea, Street Superintendent for Town of Wilbraham, Massachusetts adds, "The savings are enormous because the Zipper also grinds the pavement into one-inch minus reusable material. We don't have to excavate and truck all the blacktop, which is considered a hazardous waste. We're limited as to where we can dump it, and this machine eliminates the need to find a place and pay dumping fees."

The Zipper's other benefits include its size, which allows for flexibility on large and small jobs. The Zipper also leaves a scarified edge for better adhesion to new material. With minimal maintenance requirements, customers like Carl Flowers, Superintendent of Public Works for City of Martinez, California says, "the Zipper's been very reliable, aside from annual maintenance, the Zipper hasn't required any repairs". What's more, at an operating cost of as little as 10 cents per square foot, the Asphalt Zipper is an efficient money-maker, often paying for itself within 30-50 running hours.

Dan Shaw, owner of Shaw Equipment, in California, says he saw an immediate return on his dollar. "It paid for itself on the very first job. Extremely good machine, we love it. I wouldn't ever want to be without it."

Smythe sums the Zipper's impact on asphalt reclaiming and recycling by drawing an analogy, "You can cut down a forest with an ax, or you can use a chain saw. In my experience contractors want the powerful solution."