Where
HWY 99 - Squamish to Whistler

Why
"The selection of the Resort Municipality of Whistler as a venue for the 2010 Winter Olympic Games, and later the Paralympic Games, meant both challenge and opportunity. The opportunity was obvious... it would draw international attention to one of Canada's most beautiful skiing destinations. At the same time, some major upgrades would be necessary to make the site ready for the crowds of visitors that could be predicted."

The selection of the Resort Municipality of Whistler as a venue for the 2010 Winter Olympic Games, and later the Paralympic Games, meant both challenge and opportunity. The opportunity was obvious... it would draw international attention to one of Canada's most beautiful skiing destinations. At the same time, some major upgrades would be necessary to make the site ready for the crowds of visitors that could be predicted.

One part of the story was Highway 99, the Sea-to-Sky Highway that leads from Vancouver to Whistler, itself. Major upgrades are needed to make this major route safer and increase its capacity.

But energy supply was another factor in the equation.

In the past, Whistler has obtained much of its energy from propane, brought in by the railcar or truck. A natural-gas pipeline was determined to be a logical replacement for this system, one which would eliminate concerns about supply and safety. At the same time, natural gas offered benefits over propane as a fuel, since less CO2 is emitted in its combustion.

A contract for a natural gas connector line from Squamish to Whistler was given by Terasen Gas to Peter Kiewit Sons Co., Richmond, B.C. The pipeline contractor was Surerus Pipeline Inc., Fort St. John, B.C. 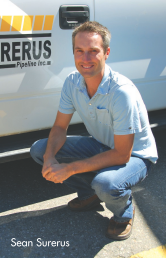 The project involved installing more than 25 km of pipeline parallel to Hwy 99. The eight-in. pipeline had to be installed on the shoulder adjacent to the fog line. It was to be a new experience for the pipeline firm, said Sean Surerus, project coordinator and incidentally son of the firm's founder, Brian Surerus. "We had crossed roads before, but never worked along them."

"Traffic control was the number-one challenge," says Surerus, since the firm had never worked in proximity to so much traffic–an average of 13,000 vehicles per day–for so long (May to August). Standard traffic control procedures were adapted in consultation with, and using some equipment from, Kiewit.

The segment of the highway that Surerus was working on was connected to two other sections, before and after, that were being widened. Its section was not being widened. Since most of the work had already been done on this section, things were relatively simple from an environmental point of view–all they had to do was control water runoff.

The firm brought in its standard equipment, including three excavators with buckets and two with breakers. Some equipment was rented locally, and local dump trucks were contracted. 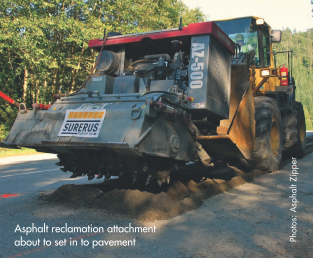 One new piece of equipment for the firm was an asphalt reclamation and recycling attachment. The Asphalt Zipper was used to mill the asphalt and recycle it as backfill. The attachment eliminated the need for saw-cutting and hauling. The capacity of the Zipper exceeded the crew's maximum speed of 400 m. of pipe laid a day. It could have done 2,000 m. a day, says Surerus, but the limiting factor was the ability of the dump trucks to negotiate the constrained working area any faster.

The pipe was sand-bedded and padded. This was done to protect it from the sharp edges of jagged chunks of rock caused by the blasting. Smaller chunks were recycled in the mobile mill. 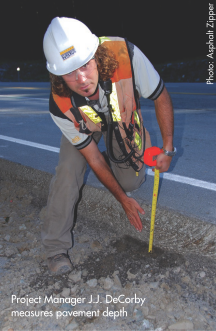 Kiewit followed after the Surerus crew and did the final paving.

The crews had to cross four bridges with the pipeline. The pipeline was suspended from the bridges using a Hilti anchoring product that firmly attached the bolts to the bridge to the point where thousands of pounds of pipe could safely be suspended. The first time they tried it, Surerus concedes, they were a little nervous, but the product performed as expected.

The project relied heavily on local resources. The company's core staff were brought to the project and the firm was able to hire everyone else they needed locally. The total staff was about 65.

Did the notorious labour shortage in Western Canada cause a problem for the firm? Squamish is an attractive area to live and work, noted Surerus, saying "we didn't have any problem finding people."